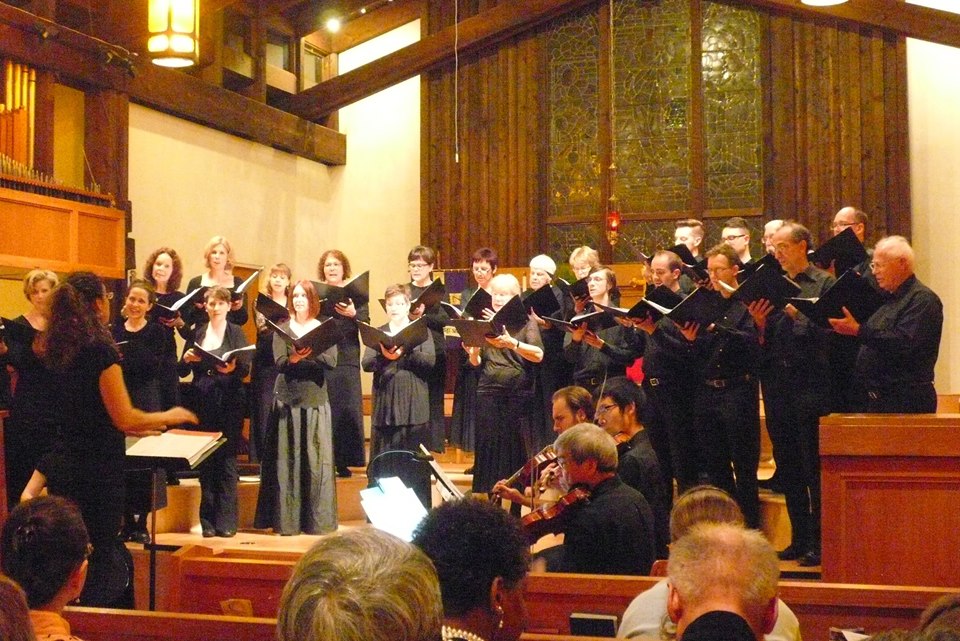 The Vivaldi Chamber Choir forsook their usual performance venue of St. Mark’s on Saturday, March 28th due to its lack of an organ – an essential element in the accompaniment for the concert’s marquee work, the Fauré Requiem.

The show began however with a couple of a capella pieces by Orlando di Lasso both of which demonstrated the somewhat wicked humour in the secular music of this prolific “5th generation” (Wikipedia) Franco-Flemish composer. Matona, mia cara imagines a German lancer in Italy, struggling with the vocabulary and idiom of an unfamiliar language, making a pressing proposal to the lady of his dreams. Because of linguistic confusion with French words entering the monologue, and certain direct language as well as double entendres the bowdlerized English translation printed in the programme falls short of the intended effect. The Italian speakers present would have “got it” without the printed textual assistance due to the choir’s excellent diction and clear acoustic at St. Helen’s. Next up was the “Echo Song” from the same composer, a canon for antiphonal choirs. The text depicts a person arguing with his or her echo, and in this account the effect was reinforced by a much smaller grouping within the choir playing the echo. In spite of encouragement, no music making develops between the choral units resulting in exasperation from the party of the first part – Basta! Basta! Basta! (Enough, enough….) only to have the sentiment fractionally replayed pianissimo. Dynamics were managed splendidly and again the clarity was admirable.

Two Vivaldi psalm settings added instrumental textures to the proceedings. Laudate Dominum, the powerfully concise but somewhat grey choral cloth of Palsm 116 was turned into an engaging & colourful tapestry by the unison violins of Tony Lee and Matthew Nakagawa ornamenting almost every bar. Laetatus Sum (Psalm 121) follows the same model with the choir declaiming the text in essentially chordal motifs quite independent of the string acompaniment. Clara Shandler’s cello provided a steady thorough bass throughout. After these appies we got the meat and potatoes of the first half – BWV 229 – a motet for double choir. The text indicates a contemplation of an earthly life’s end. Indeed the first setting of the complete 11 verse Thymich poem by Johann Schelle, a predecessor of Bach’s at the Leipzig Thomsschule was performed at the funeral of Rector Jacob Thomasius. For a look at Bach’s superb word painting you can’t do better than refer to the analysis written for the Bach Choir of Bethlehem (PA). David Millard accompanied on the organ.

After the intermission the string ensemble reassembled aided and abetted by organ and Elisa Thorn on harp. The overall sound was warmer and darker as Tony Kastelic joined Tony & Matthew on violas. True to the programme note quote from Gabriel Fauré about the Requiem’s gentleness reflecting his own personality, this was a calm account. Fauré later said that he saw death “as a happy deliverance, an aspiration towards the happiness of the hereafter, rather than as a painful passing away.” Even the lions, infernos and the bottomless pit inherent in the idea of Tartarus were encountered with only a moderate amount of bite, flame and vertigo, well handled by baritone soloist Vaughn Chauvin with the tenors and basses of the choir. This was partly a function of the reduced instrumental forces available, but as much a conscious decision to maintain the sense of anticipated peaceful repose. Both Julie Duerichen, soprano solo, and Vaughn Chauvin scaled their respective “Pie Jesu” and “Hostias” appropriately, with beauty of sound winning out over drama.

This was a delightful concert in a fine room – very nicely executed by the choir with their conductor Sarit Aloni. A large and friendly audience was most appreciative and opinion within the choir seemed to endorse St. Helen’s as a great place for music making.